Digital Jonestown
Cure for the common cult.
Posts Did I manipulate the global media with my video editing?
Post
Cancel

Did I manipulate the global media with my video editing? 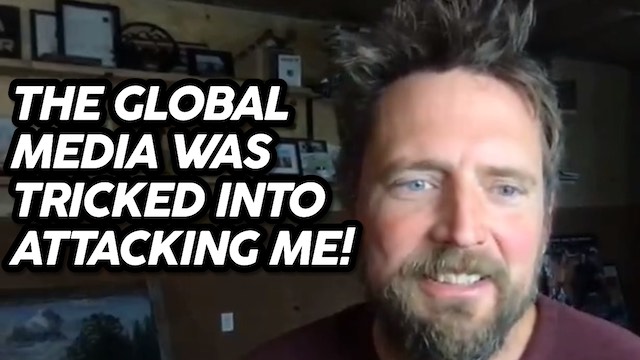 Former Comedian Owen Benjamin is facing a ton of bad press thanks to concerned residents in Boundary County attempting to have County Commissioners shut down his ‘Beartaria’ fantasy ranch.

Some of the outlets reporting on the situation made reference to a supercut I created, and now this former comedian turned cult leader is saying the video misrepresented him and was used to gaslight the global media.

Elaine Duncan and eight additional residents provided documentation supporting their belief that the owners, Struggle Bear Corporation and Owen Benjamin, have violated the zoning provisions for the neighborhood.

The Kootenai Valley Times reports on the Commissioners meeting as well, writing:

A former Hollywood comic now living in Sandpoint is allegedly offering his “Bears,” or fans of his right-wing blog who “donate” $400, the use of a Boundary County property recently purchased on Earl Lane for paramilitary-style training.

That same day, Owen responds to the ‘paramilitary-style training’ accusation by asking “what the hell are you talking about?”, and going on a tirade calling the author of the Kootenai Valley Times piece, Mike Weland, a pedophile several times:

As well as sending his ‘bears’ to Mike’s house to harass him on camera:

Inspired by watching Owen act like the ‘paramilitary training’ description was insane, on May 27 I put together a supercut, ‘Owen Benjamin’s “Private Paramilitary Force” Vertac Tactical offering Training to Idaho Bear Cult’ and published it to YouTube.

Mike Weland publishes a response to Owen in the Kootenai Valley Times and includes a link to the supercut when rebutting a bear who disagreed with his portrayal of Big Bear:

“Owen has been an enormously positive influence on my life,” Jennifer Perez Lopez wrote. “His message has always been to bloom where you are planted, to focus on growing and not engaging in drama. He encourages people to have children and raise them with love. In real time, during the January 6th Capitol riot, Owen was telling anyone who would listen to never go to an event like that. That if you were there now, to leave immediately. He was against it and advising his audience to stop participating as it was unfolding in real time. He despises war. The idea of him creating a paramilitary training camp is not only insane, it’s criminally actionable libel and slander.”

The words of Owen Benjamin himself, posted on multiple social media outlets, including YouTube, belie that wholesome, happy image.

The supercut included in the article:

Owen continues attacking Weland for the better part of this 37-minute compilation of clips from his May 28 stream.

The next day saw him make the bizarre claim that his paramilitary comments in the supercut were really just him offering to split production costs with firearms trainer Brandon Verrett:

The May 31 sermon saw Owen tell the bears that the ‘Beartaria’ neighbors love him and it’s only one lady complaining. Elsewhere in the video he acknowledges that he can’t legally offer camping for money.

Owen spoke to The Daily Beast about the supercut for their June 1 feature on Beartaria.

Benjamin told The Daily Beast no guns have been fired on the property since he purchased it. But his attempts to downplay the possibility of guns at Ursa Rio have been undermined by his habit of describing grandiose plans for the land in hours-long livestreams several times a week, with the most incendiary statements archived and analyzed by his online detractors.

For example, Benjamin has often referenced having a paramilitary force at his property, saying he is “friends with, basically, a paramilitary group” in Idaho.

“If you try to squat on my land when I offer you campgrounds, I have my own paramilitary squad,” Benjamin said in one video, warning off “Bears” who might try to live on the land permanently.

“I’d have my own private paramilitary force, which is always a good thing,” Benjamin said in another video.

Benjamin insists he was just joking about the paramilitary.

“I do not have a paramilitary squad,” Benjamin told The Daily Beast in an email. “I was making a joke as a comedian. Unless you consider my goats and chickens a military.”

In his videos, Benjamin has also discussed the prospect of guns at “Beartaria.”

“Shooting range?” Benjamin said in one video, describing his plans for a bear-themed community in Idaho. “Yes! Will there be a gun range? Yes!”

The Daily Mail also picked up the story, writing that “In videos, he spoke of having ‘paramilitary friends’ and a gun range at property”.

On his stream that day, Owen claims the supercut is out of context and being used to gaslight the media and make him look crazy, calling it a ‘massively edited ridiculous hit video’ and making the point that paramilitary training would be more expensive than $400. Owen reiterates the paramilitary thing was a joke.

On the June 2 episode, Owen blames the paramilitary news story on ‘austistic psychopaths’ taking his jokes seriously and says the global media is coming at him because of literal trolls:

Of course he also continued to attack Mike Weland as a ‘pedo wheelchair guy’, which continued on to the next stream (June 4), which proved to be a bad day for Owen as he says the bad press is giving him flashbacks, comparing the trauma he’s suffering to that of a veteran of war.

When his livechat gets trolled, Owen has a meltdown and threatens to quit livestreaming.

June 6 Owen reports that Kathy Griffin retweeted ‘the paramilitary article’. Owen attacks Weland yet again and refers to ‘the person who told everyone I was starting a compound in Idaho’ (Elaine Duncan){:target=”_blank”} as a ‘bitch’ and a ‘sodomite’ and accuses her of breaking the law.

June 7 - Owen doubles down on the claim that the media was gaslit by my cleverly edited video:

6/8 - Owen is back to saying he was only joking about having a paramilitary.

Owen’s argument comes down to a claim that he initially was fundraising for a ‘gun range’ and ‘paramilitary-style training’ on a 200-acre commercial property, but didn’t get enough donations and changed the offer to just camping on a 10-acre private piece of land.

Unfortunately for Owen, this September 9, 2020 clip proves he is lying, as he specifically offers shooting training at the land he had just purchased at 775 Earl Lane Rd in Bonners Ferry, Idaho with funds raised from his followers:

The supercut I made wasn’t out of context, didn’t misrepresent him, or anything else he wants to claim. It’s just another of the many lies catching up with a scam artist.

Days after getting a $45,000 bill from the bears’ attorney in the Patreon lawsuit, Owen Benjamin starts a fundraising telethon for a bear retreat with endless possibilities. More at https://digi...

Owen Benjamin believes his audience is dumb enough to donate millions of dollars to him for a phony Idaho bear cabin timeshare. More at https://digitaljonestown.com/categories/beartaria Origina...